Get a Quote
You are here: Home » Why Us » News » Product News » How to control granulation parameters of super mixing granulation?

Many companies do not control the geometry of the high shear mixer, but the laboratory High Shear Mixer Granulator equipment is preferably selected or designed to be similar to the device with the same geometry, i.e., the same aspect ratio.

Amplification between devices with similar geometric structures is equivalent to amplifying only the stirring impeller speed, which is much simpler. It is also essential to amplify the speed of the impeller.

The effect of the stirring impeller rotation speed on the particle size is primarily related to the composition characteristics of the formulation and the granulation mechanism of the process.

The most important thing is to consider the air intake assembly of the high shear mixer.

During the operation of many granulators, the internal particles appear twisted rope, and the powder bed moves in a circular shape in the granulating pot under the action of the air system.

The twisted rope state is vital for the mixing of the powder in the granulating pot and the distribution of the liquid, and mainly affects the size of the mother nucleus. There have been some laws for the amplification of the stirring impeller speed. Some people advocate a constant linear velocity.

Some people suggest that the Froude number (the ratio of centrifugal force to gravity inside the high shear mixer) is constant. Others have suggested using a continuous shear force inside the granulator, and they recommend using the following formula when zooming in NDn Where N is the angular velocity of the impeller, D is the diameter of the paddle, and n is a constant (n is found to be equal to 0.85, although this value is likely to be prescription-system dependent)

The role of the Rapid Mixing Granulator chopper is not very clear. Based on the nature of most of the mixtures, we found that it neither promotes the growth of the mass, increases the compactness of the mass, or breaks the particles.

Increasing the size of the shear mixer granulator can reduce the frequency of interaction between the granules and the chopper. In this case, it is an excellent idea to fix the linear speed of the cutting blade during the enlargement process because the particles are similarly impacted.

However, if other variables in the amplification process cause the particles to increase, increasing the chopper speed can reduce the size of the particles.

How to add the binder and the flow rate

Some advanced particle research has been devoted to the development of a mother core state diagram that describes the nucleation process under a given granulation process. This map has two dimensionless parameters: the time the droplet enters the powder bed and the jet flow rate (which can be considered as the ratio of the liquid spraying rate to the tumbling speed of the bed surface particles).

The droplets enter the powder bed for a short period (i.e., droplets that quickly enter the powder bed) and low jet flow (i.e., the droplets can be sprayed well onto the powder surface), and their nucleation behavior is controlled by droplets. That is to say, many mother cores are formed by a single droplet, and the size range of the mother core is relatively narrow. Either the time of droplets entering the bed increases or the increase of the spray flow rate leads to over-wetting.

The liquid deposits on the surface of the powder bed to form a large mother nucleus. In this case, mechanical force is required to destroy it. Force destruction leads to a wide distribution of the size of the mother nucleus. The size distribution of the nucleus is the beginning of granulation. For many prescriptions, it is critical to forming a similar size nucleus through the granulator. If the amplification process is to achieve the state in which the mother core is controlled by the droplets, it is required that the droplet size during the amplification process is the same as the droplet size during the small test .

Also, the low discharge flow rate is necessary (formation of a single sheet) for the droplet mother core to be effective. The method of reducing the spray flow rate is to ensure that the spray width covers the effective surface of the bed. This is to reduce the volume flow rate of the adhesive and increase the tumbling speed of the powder during the process of wet granulation in a high shear blender.

It is difficult to determine the effect of the granulation time on the properties of the granules by different granulators. The mechanical distribution of the liquid binder in a sizeable granulating pot requires an enormous time. However, this is primarily related to the formulation and process parameters.

Anyway, there are so many factors control parameters, beyond what we have written above.

Through theory and technical parameter specifications, I believe you have learned a lot about the high shear mixer, especially the reason for the difficulty in R&D high shear mixer to amplifying batch Rapid Mixer Granulator (RMG) .

Hywell machinery focus on research about granulation technology, special combines machinery, and process which are key components from importation to production.

At Hywell machinery, we are committed to providing you quality products as we are concerned about building our brand.

As such, we appreciate the feedback from you, not only in the aspect of reviews on machinery you purchase from us alone but also in our entire work process. They help us improve in all phases of our operation; from customer service to aftersales maintenance. 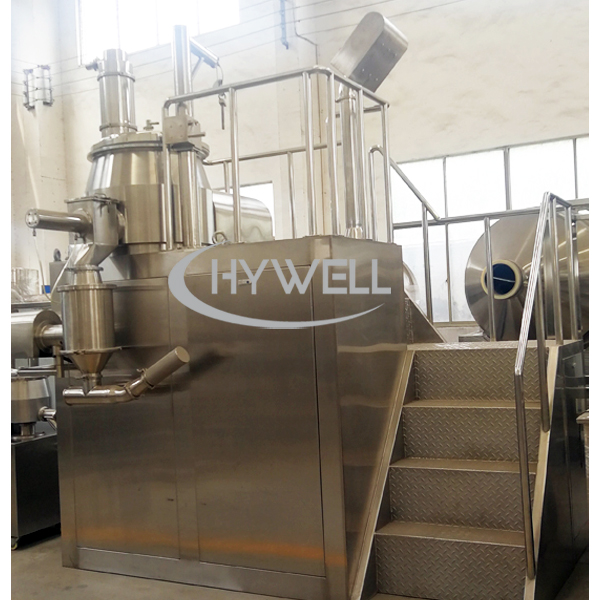 We help you avoid the pitfalls to deliver the quality and value your fo need, on-time and on-budget.
Get Started